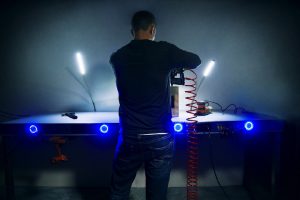 The Nexus, an exciting new piece of garage hardware, is nearing closer to completion after a Kickstarter campaign raised $59,217 in the first week of funding. While the owner, Zeb Fish, has canceled the Kickstarter after numerous comments from backers requesting a change in features, the workbench itself is still being planned for release once the improvements are made.

Personally, we think this workbench will open an exciting new era of garage innovation. The technological side of garage workbenches has been a bit stale, with most benches just being a simple worktable. The Nexus, however, is a whole different kind of bench. One that is truly designed for the garage enthusiast or any do-it-yourselfer who wants a more efficient workspace for their projects.

The Nexus Specs and Cool Features

The Nexus is expected to be released at the $1,299 price point, but this is subject to change. The bench itself is pretty incredible and comes with a whole set of features right out of the box.

Perhaps one of the most exciting options is its electric folding storage option that allows you to flip a switch which will then automatically retract the bench into a folding position, allowing for a better management of limited garage space. The bench will come with a built-in retractable extension cord along with electric sockets and USB plugs for all your devices. Located on the top of the bench are two flexible LED light bars that can be adjusted in any kind of position you want.

The workbench also comes with Bluetooth-equipped speakers and tablet holder that will allow you to listen to music, watch instructional videos, or just make hands-free calls while at your bench. Plus, the bench is ready to be equipped with just about any kind of accessory to fit your needs including tool holsters, pouches, trays, and so much more.

The Nexus is an awesome workbench that’s sure to be a welcome addition to any handyman’s garage. But the price of $1,299 makes it clear that this workbench is geared towards enthusiasts and not the everyday homeowner. If you’re looking for a simple workbench and don’t need any fancy features, it may be best to look elsewhere. But for the garage enthusiast, The Nexus may just be the perfect option.

Want to give your home’s exterior a makeover? Or are you just looking to reduce your energy costs? A replacement garage door can do all of that and more! A shiny new panel can increase your home’s value and offers one of the highest return of investments out of any home renovation. No matter what your needs are, Sac’s Garage Door Repair can help. We’re a family-owned repair company, servicing residential and commercial locations throughout the greater Sacramento area. 24 / 7 friendly service and all repairs come with our 100% satisfaction guarantee.